Humans are fundamentally creative; it is in our nature to originate.This requires us to live close to boundaries.That’s hard, painful because edges are unsafe. They are the source of the unknown – not just because of what lies beyond the boundary – but mostly because of what new forces are stirred up at the tidal line where systems interact.

There is a condition known by psychoanalyists as claustroagrophobia. This is a type of psychosis when a person lives on the shoulder of many societies. Claustrophobic if immersed at the centre of a group, agrophobic if excluded. It seems to me that many great thinkers may have expressed this as a quality, rather than a problem – oscillating between sociability and introversion, living even in this way at the boundary between the external and internal world.

The reward for this stressful unsafe existence? Certainly not money or security. It is the glistening fish of a truly new idea – hooked and netted out of the maelstrom and whirlpool of the meeting of many worlds.

When we create something unique and original – whether written, composed, painted, or thought  – it is hard work. Analagous to giving birth.

“This is the eternal source of art: a man is faced by a form whihc desires to be made through him into a work. This form is no offspring of his soul, but is an appearance which steps up to it and demands of it the effective power. The man is concerned iwth an act of his being. If he carries it through, if he speaks the primary word out of his being to the form which appears, then the effective power streams out, and the work arises. The act includes a sacrifice and a risk. This is the sacrifice; the endless possibility that is offered up on the alter FJLof form. For everything which just this moment in play ran through the perspective must be obliterated; nothin of that may penetrate the work. The exclusiveness of what is facing it demands that it be so. This is the risk: the primary word can only be spoken with the whole being. He who gives himself to it may withhold nothing of himself. The work does not suffer me.. to turn aside and relax in the world of It; but it commands. If I do not serve JLit aright it is broken, or it breaks me.”

Diary of a hypcrite. Gemuetlichkeit.. means smug self righteousness and self satisfaction.. a wake up call for all of us who bemoan Brexit Trump etc..I scored 190 in the Sunday Times liberal elite quiz.. every one I know scores over 150…good? Don’t be so sure. The Sunday Times take is as follows (and they have a point)..”over 150? You’ve made it. You are an overeducated elitist snob, part of the detached and superior 5%. When the Brexit result came in you probably coughed up blood. You have no understanding of the lives of the rest of us, and you live in an area where the poor are kept tidily out of sight, until you need them to convert your basement into a kitchen-diner”.

Me? An anti Trump march in London followed by ballet at the Royal Opera House and overnight at my club. But hey, I go to Church most Sundays.. 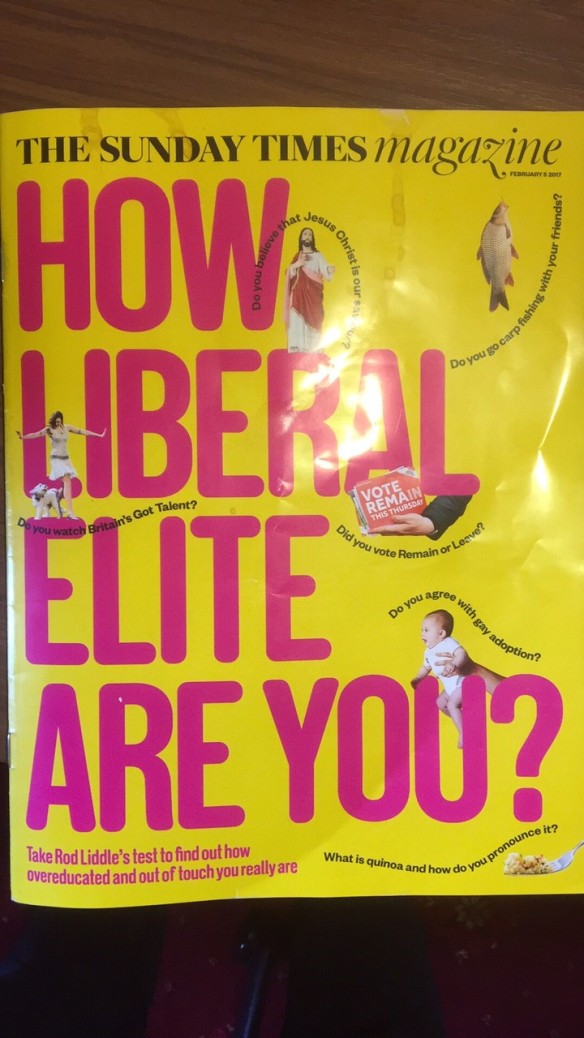